Get your foot in the door...

How can a person be manipulated to do something they don’t actually want to do? One idea is that once a person has been prompted to comply with a small request they are then more likely to then comply with a larger request. This is often called the foot-in-the-door technique, imitated in the quote “if you give them an inch, they will take a mile”.

The foot-in-the-door technique has known to been used throughout history. It was the technique that Korean brain washing tactics were based on (Schein, Schneier & Barker, 1961) and a technique commonly used in 1940 Nazi propaganda (Bruner, 1941).

Freedman and Fraser (1966) conducted an experiment to see if it is the case, that if someone had complied to small request they are more likely to then comply to a larger request.

Method:
The experiment was a field experiment where 156 Californian housewives were selected at random from a telephone directory and randomly assigned to conditions. They were asked to allow a survey team of 5/6 men to come to their home for 2 hours to classify the household products they use. For the performance group condition subjects were contacted twice.  The first call was made on the Monday/Tuesday where they were asked to comply with a small request and then contacted 3 days later to comply with a larger request. In the one-contact condition there were just asked to comply with one large request. All large requests were on Thursday or Friday.

In the large request the subjects were told the survey involved 5/6 men coming to their home for 2 hours and classifying the household products they have. This information would be used in the writing of their public service publication.

The hypothesis was more subjects in the performance condition would comply with the larger request. 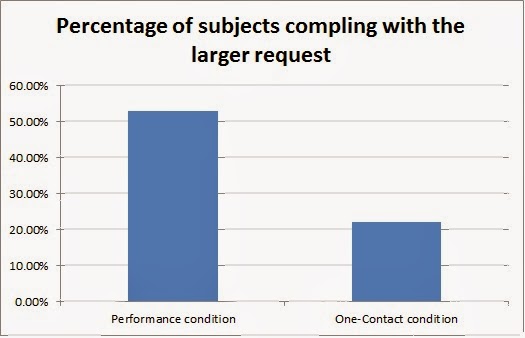 It is thought that the foot-in-the-door technique was successful in producing these results.  When subjects agreed to the first, small request the subjects subsequently think the experimenter expects him to also agree to the second, larger request. The subject is left feeling obligated and does not want to disappoint the experimenter so carries out the larger request.