Ever wondered how to make a group of people do something? It's simple, just do it yourself and a majority of them will follow suit. This guy wanted a dance party, so he started dancing himself!

Why did this work?

Social proof, of course! This is the idea that we look to the actions of others in a given situation, to determine what is the socially acceptable and correct way to behave (Cialdini, 1993).

In a simple, yet brilliant social experiment, Milgram and colleagues demonstrated this effect by having confederates on a New York Street look up at a 6th floor window, and see how many passersby would look as well (Milgram, Bickman, & Berkowitz, 1969). In all, they observed 1,424 pedestrians who passed along 50 feet of a busy sidewalk. There were 30 trials, 5 each of  1, 2, 3, 5, 10 or 15 confederates in the centre of this space, looking up for 60 seconds.  Videos were taken for each of the 1 min trials and analysed.

The percentage of people who followed the gaze of the confederates was quite high! With just one confederate looking up, 42% of the passersby also looked. This number increased with an increase in the number of confederates. With 15 of them, a whopping 86% of the passersby also looked up. Not only did people look in that direction, but some also stopped to look. 4% stopped with just one confedreate whereas this number increased to 40% when 15 confederates were looking at the window.
Figure 1 shows Milgram et al's findings. 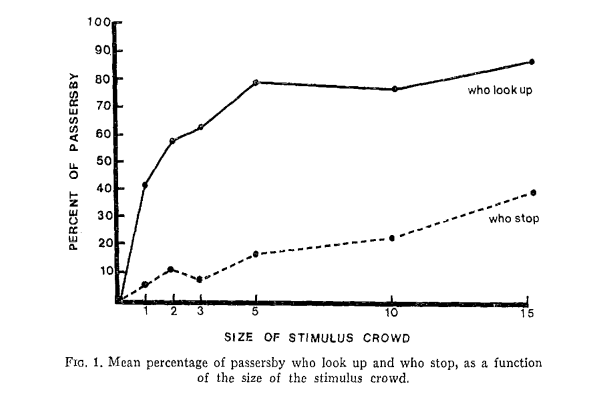 This study not only shows that people will copy other people's behaviours but also that the more number of people are exhibiting a certain behaviour, the more others are likely to follow. This compliance technique has been proved over and over again.

So, if you ever want people to do something, grab a few friends and do it yourself! People will join in for sure. It would be quite entertaining to see how many people would copy your behaviour if a bunch of you stood in the middle of the Piazza and just looked to the sky for a while.

Geetanjali Basarkod
Posted by Unknown at 9:21 AM