Two techniques to help ensure compliance that are often used in advertisements are scarcity and social proof. An example for scarcity would be to say that a certain product is only available for a limited amount of time. This is a persuasive technique as viewers tend to think that rare products are good (Cialdini & Goldstein, 2004). Scarcity also works because we think that our freedom of choice is being limited and therefore react (and buy) to ensure that we can make our own decisions – a phenomenon known as reactance (Brehm, 1966). Social proof works as a persuasive technique because people tend to think that what a lot of other people do must be good (Cialdini & Goldstein, 2004).

In their study in 2009, Griskevicius et al. tested whether these two persuasive techniques always work in the same way. According to the evolutionary model, different stimuli arouse different feelings, thus having a different impact on behaviour and cognition (Schaller, Park, & Kenrick, 2007). Therefore, persuasive techniques should work differently in different situations. The study tested this by comparing the influence of both techniques in two different emotional settings, namely fear and romance.

Fear is expected to make participants prefer group-cohesive processes. This means that social proof (as it stresses the group aspect of a decision) should be especially effective in a fear context. In contrast, scarcity, emphasizing one’s own unique opinion, should be less effective. Likewise, as romantic feelings make a person want to stand out from the crowd in order to make sure that the potential partner notices him or her, using social proof as a persuasive technique should be less effective, while scarcity will rather display the uniqueness of a person and is therefore presumed to be more effective.

To test these hypotheses, participants were shown either a fear- or romance-eliciting movie or read an article that aroused one of the two feelings. Subsequently they were shown one of two advertisements: In the one condition, the social-proof-technique was used as a means of persuasion, by mentioning that the advertised object (a restaurant or a museum) had been visited by many people and was very popular. In the other condition, the object in the advertisement was put into a context of scarcity (as “unique” or “one-of-a-kind”). The fear group, romance group and a control group (whose advertisements did not use social proof or scarcity) were then compared on the basis of their liking for the advertised object.

Support was found for both hypotheses: As assumed, the “fear”film-clip/story made the social proof option more attractive whereas the scarcity option became less attractive. Similarly, after seeing or reading a romantic film/story, participants tended to prefer the advertisement that emphasized the object’s uniqueness, while they liked the social-proof option less than both the fear-participants and the control group. 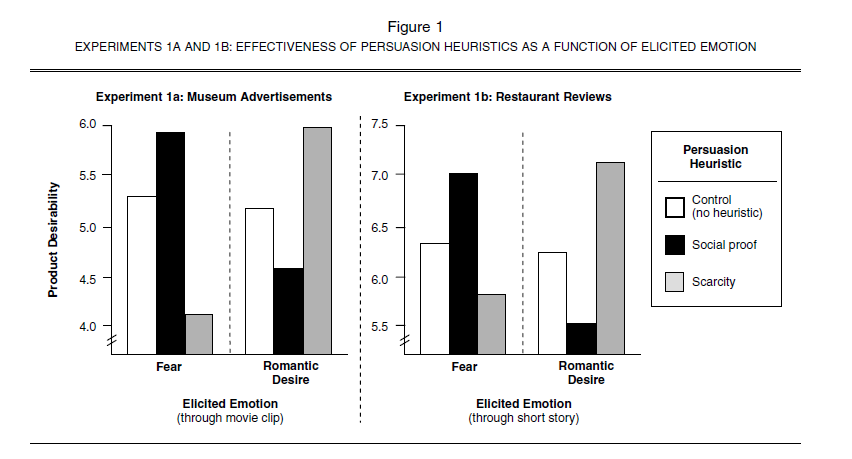 In conclusion, this experiment showed that although social proof and scarcity are both frequently used persuasive techniques, it is important to look at the context in which they are used, especially on TV: One will have to think about which films will be shown and consequently which kind of feelings they will arouse, in order to choose the appropriate persuasive technique.