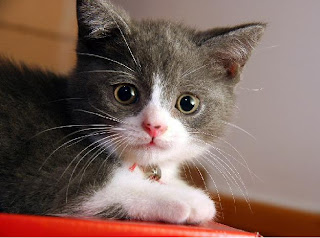 This morning I witnessed my housemate get completely and irrevocably lured into giving monthly donations to the worthy cause of Cats Protection. The street team stopped us and asked us whether or not we like cats. Followed by, "how much do you like cats?" and "On a scale of 1 to 10, how much do you LOVE cats?"

My housemate really likes cats, and so gave pretty strong positive answers to these questions. As soon as it had been established that he was a solid 15 on the cat-loving rating, the sales person jumped in with "so you won't mind donating a very small amount of money every month to help our cause then?"

This is an example of self-perception theory in practice (Bem, 1965). By asking questions to my housemate that made him realise his love of cats, the sales person was pointing out to my housemate that this is a trait of his personality, part of what makes him who he is: he is a cat-lover. When my housemate was asked to donate money,therefore, if he refused this would be incongruent to his beliefs and would cause cognitive dissonance.

This theory is depicted in Chaiken and Baldwin's (1981) study.  Participants were asked a series of questions, specifically designed to elicit pro- or anti-environmental answers. They were then asked to rate their attitudes towards this subject. Results showed that participants were more likely to rate themselves as being pro- or anti- in accordance with the answers that were elicited from them. This depicts the process of "I just said this, so I must think this..." In the case of my friend and the cats this process was extended to "I just said I love cats, so I must love cats, so I should give money to the cats." Unfortunately for the cats, his card was declined.