If you’ve stayed in a hotel recently, you may have had the choice of whether or not to re-use your towels. It is in the interests of the hotel for customers to do this as not only does it save them money on costs such as labour and water, it also makes them look environmentally conscious and pro-social, thereby improving their public image (Carlson, Grove, & Kangun, 1993; Menon & Menon, 1997).

Goldstein, Cialdini and Griskevicus (2008) conducted a study to investigate whether social proof could increase customers’ compliance to a towel re-use programme. They compared two approaches. The first was the industry standard approach, a message which focuses on the importance of environmental protection. The second was a message which conveyed the descriptive norm, informing guests that most other guests (75%) participate in the programme. The study was conducted over an 80 day period in a hotel belonging to a well know national chain. Data was collected from 190 rooms, which amounted to 1,058 potential towel re-uses. 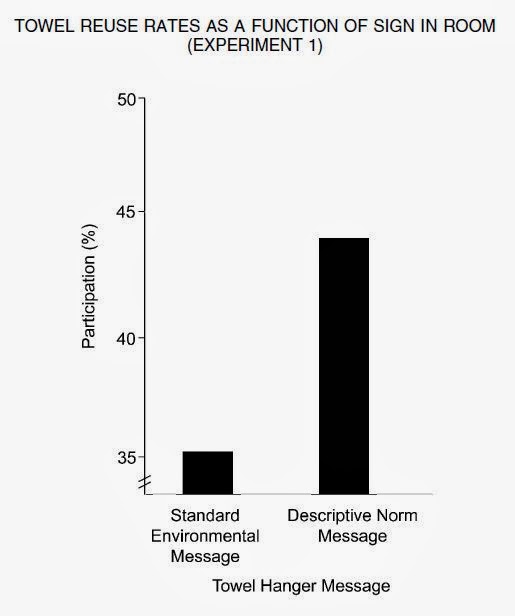 As shown in figure 1, the research found that nearly 10% more people in the descriptive norm condition re-used their towels than in the environmental protection condition (44.1% and 35.1% respectively). This indicates that people use others’ behaviour to guide their decision making. If everyone else is doing it then I should too!

They also conducted a second experiment, building on the first, where they looked at the effect that social identity can have on compliance. In this second experiment the researchers employed not only the principle of social proof, but also the principle of similarity. The same procedure was used as in first experiment, but this time there were five signs with different messages on them. Data was collected over 53 days, with 1,595 potential towel re-uses. They compared the standard environmental message (as in experiment 1) with messages identifying participants as either a hotel guest, a hotel guest of a particular room, a citizen or a male/female.

The importance of group identity was rated by a separate group of participants (shown in figure 2). However, interestingly, and contrary to some previous research (Kleine, Kleine, & Kernan, 1993; Reed, 2004; Terry & Hogg, 1996) it was not the group they identified with most that led to the highest levels of compliance, but the group that they were most situationally similar to. The highest rate of compliance was found amongst guests who had been told that most of the guests previously staying in their room had re-used their towels (49.3%) – a figure which was significantly higher than the other three descriptive norm groups combined (42.8%). The results of the second experiment are shown in figure 3. 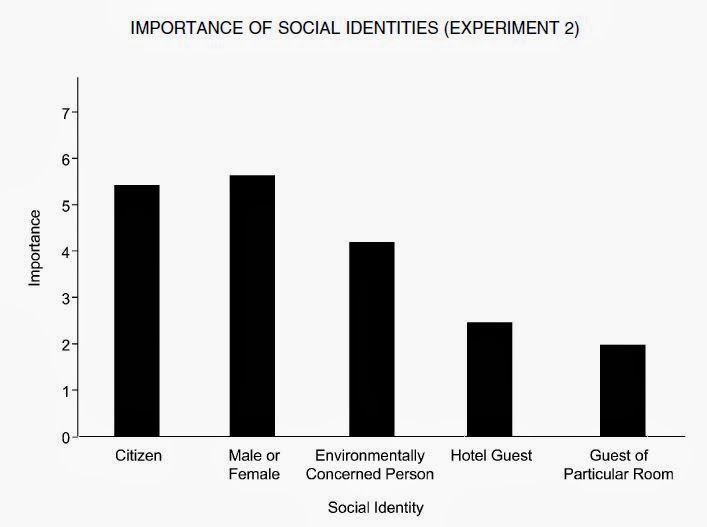 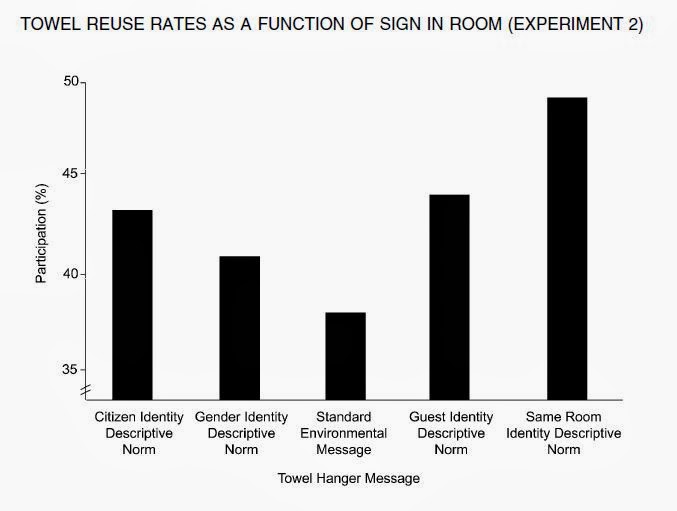 The study supports the principle of social proof; when we are unsure of the correct way to act we look to others in order guide our behaviour, even when they are not physically present. The findings of the second experiment give interesting insight into how others influence us. While it is clear that similarity plays an important role in influence, it may not just be how much we identify with someone, but whether they have been in a similar situation, which determines how much they can influence us.

Menon, A., & Menon, A. (1997). Enviropreneurial marketing strategy: The emergence of corporate environmentalism as market strategy. Journal of Marketing, 61, 51–67.